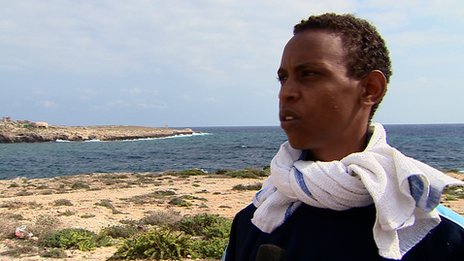 More than 350 people are said to have died when a boat of African migrants sank off the Italian island of Lampedusa last Thursday. Futsum Mesfa, from Eritrea, is one of the lucky survivors. He tells the BBC of the ordeal.

On the rocks of Lampedusa island, Futsum and Berihu are looking at the sea.

Both are from Eritrea and 20 years old. Futsum says that after arriving in the Libyan capital, Tripoli, he was driven in a car for two hours and arrived on a beach where a large group gathered before setting off for Lampedusa.

They were first told that they were heading to Sicily but later, during the journey, the skipper told them that plan had changed.

“The boat completely stopped when we got close to the island, it wouldn’t move anymore.

“The skipper decided we needed to attract attention so we could get rescued. He set fire to a blanket, but his hand caught fire and he threw the burning blanket away towards people who were sitting there.

“People started screaming and everybody ran towards other side of the boat.

The boat lost its balance and capsized. I also panicked with the others, I didn’t want to get burned and I jumped into the water.

“For a short moment the boat floated – it was upside down but didn’t sink immediately, so I got on top of it.

“Then after five minutes the boat disappeared under the water and I started swimming.

“We could see the lights of Lampedusa in the dark and swam towards the lights.

“After swimming for a long time – probably around three hours – boats started to arrive to rescue us. Rescue boats, small boats, all the boats in the area came to save us, they dragged us out of the water.

“I lost my cousin, who was on the boat with me, I also lost many friends, I had spent a lot of time with many of the guys there so I consider them all my family.”

Why people flee Eritrea and Somalia 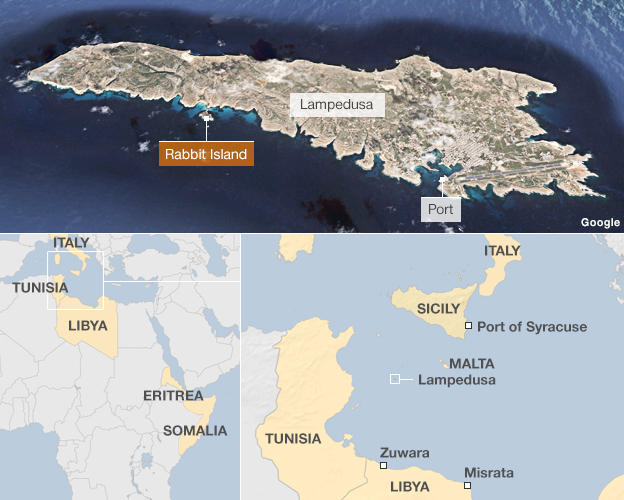 Have you or has anyone you know made this journey? Or have you taken other risks to get into Europe? Please get in touch using the form below.