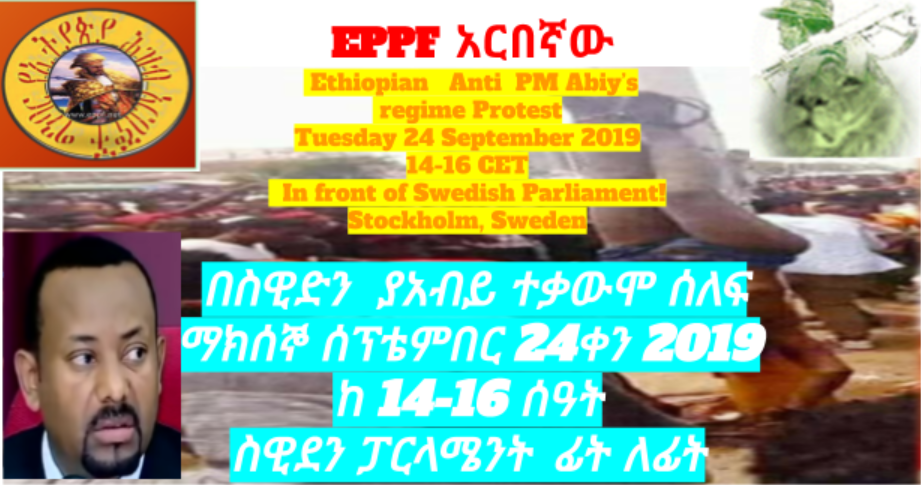 We are calling your attention today by manifesting in front of your esteemed legislative Office in Stockholm in your beloved capital.

Since the coming to power the New Premier Abiy in power April 2018, the country is in full turmoil. Our organization has rejected the blank amnesty given to all opposition movements without any real change in the system.

“Ethiopian People’s Patriotic Front, EPPF is an organization standing for the liberation of Ethiopia, from the irredentist regime actually in power to a democratic and peace-loving country of social peace based on social justice.

1.  Over 3 Million Ethiopian have been internally displaced.  Ethiopia has seen the highest number of people forced to flee their homes within their country in the first half of 2018, according to the IDMC report on global displacement out today. Our Movement has declared Communique against the Abiy regime for mass displacement of the population on 21st March 2019 which forcing millions to exile.

2. Hundreds are still leaving Ethiopia risking their lives through war-torn Yemen. According to UNHCR more than half-a-million asylum-seekers, refugees and migrants have traveled by sea to Yemen. Most are Ethiopians, often hoping to travel through Yemen to the Gulf States and beyond.

3. Hundreds of thousands of refugees are stranded in places such as Sudan, Libya, and Egypt and are awaiting better weather to begin the journey across the Mediterranean. Ethnic-based instability in Ethiopia provoked by the policies of the regime is one of the main contributing factors.

4.  Many have been killed by mob justice in different Bantustan regions of Ethiopia.

5.  The first Month Abiy came to power engineer Seminew Bekele of the Blue Nile Dam was assassinated in main squares of Addis Ababa

6.   Demese Belete Journalist from USA member of EPPF was poisoned and killed by Government agents after his return accepting Abiy’s return call.

7.       Col. Alebel Amare A refugee from Sweden is thrown in prison with impunity recently returning to Ethiopian by Abiy Appeal to the diaspora.

8. The regime has provoked religious schisms among Ethiopian Christians and Muslims initiating religious war by burning churches, monasteries, and mosques.

We humbly demanding your office to take the necessary action to help stop the in human acts by condemning the impunity committed in Ethiopia and support the genuine cases of Asylum seekers in Sweden.