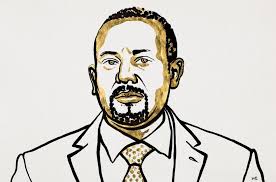 “peace agreement will help to bring about positive change for the entire populations of Ethiopia and Eritrea.” Thus, the prize was not awarded to Eritrean dictator Isaias Afwerki, Abiy’s so-called partner in the talks.

“Peace does not arise from the actions of one party alone.”

This deal has any officially published accord known to this day, rather a personal agreement between the two leaders. It is a peace award without arriving at any peace among the two belligerent nations. The best example would be the border crossings between Ethiopia and Eritrea were opened last year, but Eritrea soon closed the border again.

In  Eritrean today, there is no independent political parties,  no free media, no either constitution or any election since independence.  The United Nations released the results of a year-long investigation in 2015, into human rights in the country, finding “systematic, widespread and gross human rights violations,” including extrajudicial killing, torture and forced labor.

The Irony of the Nobel Committee

Nobel’s will was supposed to be dedicated –

“the person who shall have done the most or the best work for fraternity between nations, for the abolition or reduction of standing armies and for the holding and promotion of peace congresses”.  In the case of PM ABiy, he did not fulfill either of them. Adolf Hitler was recommended to the Nobel committee in 1939 by  Erik Gottfrid Christian Brandt, a social-democratic member of the Swedish parliament naming him

“the Prince of Peace on earth, ”  and calls Mein Kampf “the best and most popular piece of literature in the world,” and expresses confidence that the dictator could “pacify Europe, and possibly the whole world.”  Brandt, the anti-fascist, and had meant the letter to be irony.

Today it must be taken as “Irony of Norwegians Committee” for Ethiopians to accord a Nobel Prize to the man destroying Ethiopia from its historical legacy.