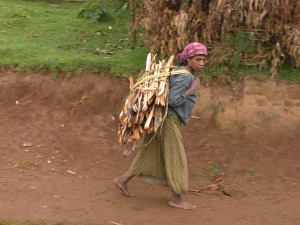 The Global Multidimensional Poverty Index (MPI), published by Oxford University, Ethiopia ranks the second poorest country in the world just ahead of Niger. The study is based on analysis of acute poverty in 108 developing countries around the world. Despite making progress at reducing the percentage of destitute people, Ethiopia is still home to more than 76 million poor people, the fifth largest number in the world after India, China, Bangladesh and Pakistan. India has the world’s largest number of poor people at more than 647 million.

87.3% of Ethiopians are classified as MPI poor, while 58.1% are considered destitute. A person is identified as multidimensionally poor (or ‘MPI poor’) if they are deprived in at least one third of the weighted MPI indicators. The destitute are deprived in at least one-third of the same weighted indicators, The Global MPI uses 10 indicators to measure poverty in three dimensions: education, health and living standards.