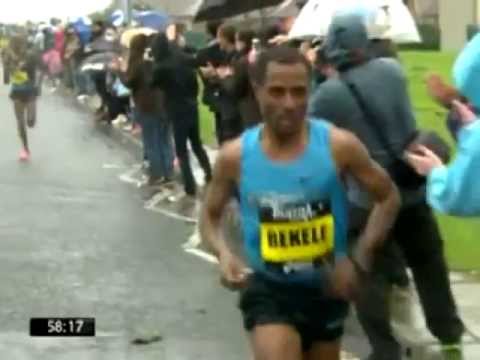 MO Farah had no complaints about finishing second to long-distance great Kenenisa Bekele after being pipped to the post in the Bupa Great North Run on Sunday.

The pre-race build-up had focused on the contest between the British double world and double Olympic champion and Ethiopians Bekele and Haile Gebrselassie.

And the race did not disappoint as the trio remained glued together for most of the 13.1-mile course across Newcastle and South Shields.

In the end it was Bekele who led the three runners home in a time of one hour and nine seconds, holding off a late charge from Farah over the last 100m.

And the Briton, who finished one second adrift, felt there was no shame in losing out to such an illustrious rival.

“It was a good race, a great finish,” Farah told the BBC.

“When Kenenisa went with a mile to go I thought the pace was just ridiculous. I thought I’d come back and close the gap slowly and I managed to close a little bit, but you can’t take away what he has.

“He has great speed and it came down to the last 200 metres and right to the line, but it was a great race and Haile did most of the work and kept pushing and pushing.”

The crowd were treated to a thrilling race in trying conditions.

With the runners battling wind and persistent rain, the lead trio pushed each other along until one mile from the finish in South Shields.

Bekele, running his first competitive half-marathon, then chose a steep slope on the course to make his break, leaving Farah and Gebrselassie in his wake.

The Briton managed to maintain a consistent gap to the leader, but the pace became too much for the 40-year-old Gebrselassie, who soon dropped off.

At that point, the race looked to be Bekele’s until Farah made a spirited push, showing gritted teeth in a desperate attempt to snatch victory in front of his home support.

However, the experienced Ethiopian was wise to the danger and did just enough to stay ahead of his rival, crossing the line with a slight smile of triumph across his face.

Farah could nevertheless be pleased with his accomplishments, just weeks after claiming a 5,000m and 10,000m double on the track at the World Championships in Moscow.

“My main preparation was for the World Championships so I only had two to three weeks preparing for this race,” he said.

“But at the same time I am disappointed to finish second. But I didn’t just finish second, I finished second to a great athlete.

“Now I’ll take my break, go on holiday and get ready for the London Marathon.”

Bekele, who has battled his way back from injury, was understandably proud of his achievement.

He said: “It was amazing. Since before the World Championships I was concentrating on training hard. I’m feeling confident, I trained well and in the end I did it.”

The womens race was also a crowd-pleaser, with Kenya’s Priscah Jeptoo finishing just four seconds shy of the course record to come home first in one hour, five minutes and 44 seconds.

Pre-race favourites Meseret Defar and Tirunesh Dibaba, both of Ethiopia, had to settle for second and third place respectively after failing to match the pace of Jeptoo.

British Paralympian David Weir was the winner of the mens wheelchair race, his fourth victory at the Great North Run, in a time of 43:03.