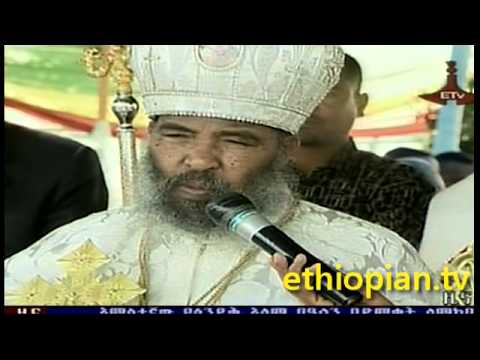 The Ethiopian Orthodox Church has announced the death of its ” patriarch”, Abune Paulos named by Melese Zenawie.

He was hand picked by the Melese Zenawie the Ethiopian Dictator. Zenawie himself   has not been since Los Cabos G20 Meeting in  June 20, 2012. Paulos is known for killing an Ethiopian inside the Church. He is repeated carrying pistol with his cross even inside the church. He was supposed to show to public the three thousand years old Ark of covenant with out success.
Paulos, whose full title was His Holiness Abune Paulos, Fifth Patriarch and Catholicos of Ethiopia, Ichege of the See of St Tekle Haymanot, Archbishop of Axum, died early Thursday in Addis Ababa, aged 76.
The patriarch, who was one of the seven serving presidents of the World Council of Churches is said to have been taken ill a few weeks ago with that of  Melese Zenawie , but the cause of his death, is yet to be established. All Ethiopia with the international community is waiting the new about the where about of Melese Zenawie. It is promised he will show him self before the Ethiopian New year . Majority believed he is dead like that of Paulos his ” personally elected Patriarch.
He was Born in Adwa in Tigray Province like that of  Dictator Melese Zenawie in the  northern part of the country, the patriarch did his education at the Theological College of the Holy Trinity in Addis Ababa under the patronage of Patriarch Abune Tewophilos.
He was sent to study at the St. Vladimir’s Orthodox Theological Seminary in the United States and later undertook doctoral degree at Princeton Theological Seminary.
The patriarch also lived in exile in the United States.