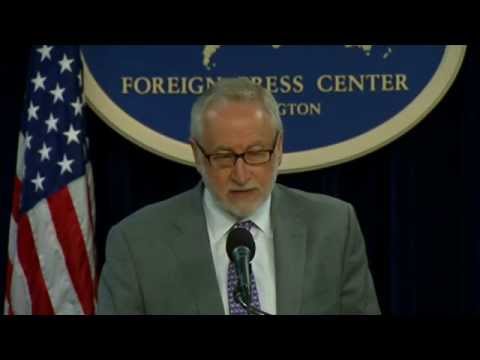 In response to the Ethiopian government’s arrest of six members of an independent blogging group and three journalists on April 25-26, Freedom House released the following statement:

“Ethiopia’s arrests of journalists are a chilling example of the government’s efforts to silence alternative voices and dissent,” said Vukasin Petrovic, director of Africa programs at Freedom House. “These independent voices have worked responsibly to give important social and political issues serious consideration.”

“Freedom House urges Secretary of State John Kerry to use his forthcoming trip to Ethiopia to ask the government to dismiss these charges if evidence is insufficient,” Petrovic said, “and to provide the accused with immediate access to legal representation and family members.”

Freedom House is an independent watchdog organization that supports democratic change, monitors the status of freedom around the world, and advocates for democracy and human rights.

Join us on Facebook and Twitter (freedomhousedc) and stay up to date with Freedom House’s latest news and events by signing up for our RSS feeds, newsletter and our blog.

Global press freedom has fallen to its lowest level in over a decade, according to a Freedom House report released today. The decline was driven in part by major regression in several Middle Eastern states, including Egypt, Libya, and Jordan; marked setbacks in Turkey, Ukraine, and a number of countries in East Africa; and deterioration in the relatively open media environment of the United States.

Freedom of the Press 2014 found that despite positive developments in a number of countries, most notably in sub-Saharan Africa, setbacks were the dominant trend in every other region. The share of the world’s population with media rated “Free” remains at just 14 percent, or only one in seven people. Far larger shares live in “Not Free” (44 percent) or “Partly Free” (42 percent) media environments.

“We see declines in media freedom on a global level, driven by governments’ efforts to control the message and punish the messenger,” said Karin Karlekar, project director of the report. “In every region of the world last year, we found both governments and private actors attacking reporters, blocking their physical access to newsworthy events, censoring content, and ordering politically motivated firings of journalists.”

“In 2013 we saw more cases of states targeting foreign reporters and media outlets,” Karlekar added. “Russian and Chinese authorities declined to renew or threatened to withhold visas for prominent foreign correspondents, but the new Egyptian government went a step further by detaining a number of Al-Jazeera staff on charges of supporting terrorism.”